Despite Canadians generally positive attitudes toward refugees and immigrants, conservatives continue to try to make it controversial. They try to limit the number of immigrants and refugees admitted to Canada, the types of immigrants we allow, try to frame the debate as if we have to choose between immigration and domestic concerns and sometimes even subtly nod to racists and Islamophobes. However, the reality is that Canada absolutely needs immigrants if we’re going to have any say in our own future.

The world is currently in flux. Authoritarian governments are on the rise again and old alliances seem less solid than at any time since WWII. Climate change is turning cropland into desert and causing fish stocks to decline. Some parts of the world will flood when sea waters rise in the coming decades and other parts will become too hot for human habitation. All of this will lead to increased political and economic instability and will force more and more people from their homes. In 2016, there were a record 65.6 million refugees in the world and that could represent the new normal, it could even go up considerably but it’s unlikely to go down anytime soon.

As a “nation of immigrants” Canadians generally want to help displaced people on humanitarian grounds. We have never forgotten that we turned away ships full of refugees trying to escape Nazi-controlled Europe, many of whom returned to die in concentration camps. It is a stain on this country and not one most Canadians would choose to repeat.

However, even if you are not swayed by humanitarian concerns, Canadians need refugees and immigrants as much as they need us.

Immigration critics have argued that the government needs to focus on people and problems at home, rather than bringing in more immigrants. They are making the mistake of assuming that those things are separate. In order for the Canadian economy to grow we have to increase the size of the workforce and, with birth rates low, immigration is the most reliable ways of doing this. In other words, we need more immigrants so that we can take care of people at home.

According to the Conference Board of Canada, immigrants will be responsible for 100 percent of population and workforce growth in Canada over the next few decades. They will also make it possible for Canada to support a large and growing generation of retirees. So, it is not a choice between helping immigrants and “supporting our own”. Increased levels of immigration will be necessary to help people already here. 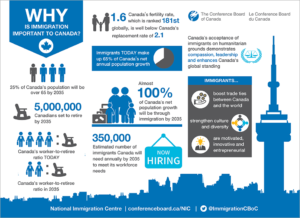 In a post-climate change world, Canada will become desirable real estate. While most of the world will lose productive farmland to climate change, Canada will actually gain some. Canada will also have abundant natural resources, including and especially fresh, potable water.  Finally, Canada has an abundance of space with a population density of about 4 people per square kilometre (compared to 33 per square km in the US and 100-400 in most of Europe). Put simply, Canada has a land mass larger than China and a population less than that of California.

Depending on how history unfolds, and how bad things become, many countries could see Canada itself as a valuable acquisition. At the very least, many could see it as a, militarily and politically weak, exploitable source of resources.

We have the space and resources to, in cooperation with Canada’s First Nations, bring in large numbers of immigrants in an orderly manner, to build up new urban and suburban areas, outside of the already overcrowded cities of Toronto, Montreal and Vancouver and to achieve increased strength, power, stability and economic growth as a result. However, if we retreat from the world instead, limit immigration, pull back from global trade and refuse to invest in areas outside existing mega-cities we will be extremely vulnerable and could lose control of it all.

Aside from the threat of exploitation by major powers, we would run a risk of being overrun by uncontrolled immigration. If we are sparsely populated, with under-resourced police, border services, coast guard and military and if there are tens of millions of desperate people on the move, we could simply be overrun, whether we like it or not. Some people are very upset about the hundreds of asylum seekers crossing into Quebec from the United States, but if things become bad enough it could be thousands per day, pouring over every border and point of entry.